I know that you all have heard me go on a time or two about my undying love for one Chris King. I first fell for him in So Much It Hurts by Melanie Dawn. Finding out that Melanie was writing a book for Chris was like my birthday, Christmas, and Arbor Day all rolled into one.
I cannot WAIT for this book, and am so excited to share the cover with you today! 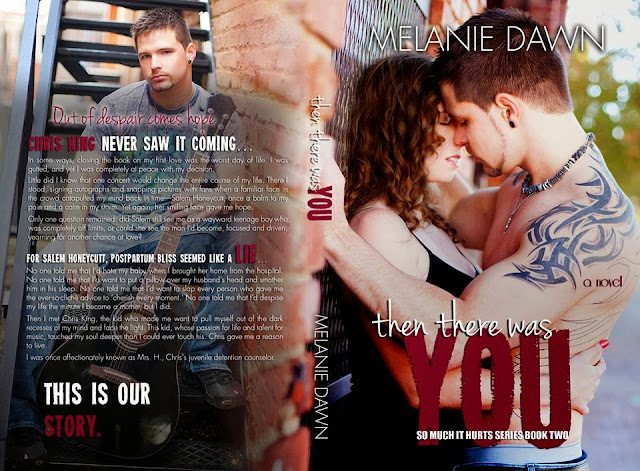 Title: Then There Was You
(So Much It Hurts Series Book Two)
Author: Melanie Dawn
Cover Artist: B Design
Cover Photographers: Positively Posh Photography
Add to Goodreads
Hosted by: The Book Avenue

Chris King never saw it coming…
In some ways, closing the book on my first love was the worst day of life. I was gutted, and yet I was completely at peace with my decision. I walked away knowing that I did what was best for her, unsure if I could ever recover. Little did I know that one concert would change the entire course of my life. There I stood, signing autographs and snapping pictures with fans when a familiar face in the crowd catapulted my mind back in time—Salem Honeycutt, once a balm to my pain and a calm in my storm. Yet again, her smiling face gave me hope. Only one question remained: did she still see me as a wayward teenage boy who was completely off limits, or could she see the man I’d become…focused and driven, yearning for another chance at love?
For Salem Honeycutt, postpartum bliss seemed like a lie…
No one told me that I’d hate my baby when I brought her home from the hospital. No one told me that I’d want to put a pillow over my husband’s head and smother him in his sleep. No one told me that I’d want to slap every person who gave me the ever-so-cliché advice to ‘cherish every moment.’ No one told me that I’d despise my life the minute I became a mother, but I did. Then I met Chris King, the kid who made me want to pull myself up from the dark recesses of my mind and face each day. This kid, whose passion for life and talent for music, touched my soul deeper than I could ever touch his. Chris gave me a reason to live. I was once affectionately known as Mrs. H., Chris’s juvenile detention counselor. This is our story.

Melanie Dawn is a thinker, a dreamer, and a hopeless romantic. When her head isn’t in the clouds, she spends her time as a jack of all trades to her family. Melanie resides in the hills of North Carolina with her husband, her three children, and her cat. She enjoys lazy summer afternoons cruising around the lake on the pontoon boat with her family.
Melanie graduated from UNC-Chapel Hill with a BA in Psychology and earned her MA in School Counseling from Appalachian State University. She spent the first six years after graduate school as a middle school counselor. Those were years she deems as some of the best years of her life. That is, until she had children of her own. The last seven years have been spent as a stay-at-home mom. She has learned some tough life lessons, like what the inner absorbent pellets of a diaper look like scattered in the washing machine. She has also learned the strength of the willpower of a two year old lacking a nap. Through it all, Melanie has learned how to roll with the punches and appreciate the time she has been able to spend at home with her children.
Now that her last child has started Kindergarten, Melanie is ready to add a new chapter in her life. That chapter begins with her debut novel—So Much It Hurts.
FACEBOOK | TWITTER GOODREADS