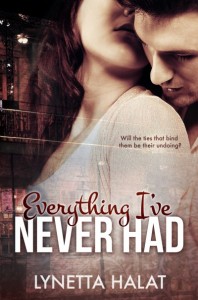 Celeste Hebert has always appeared to have it all, but there are many things she’s never had, been forbidden from having.

One night. One song. One kiss. The perfect trifecta to unleash the floodgates of a forbidden attraction between the widow and her husband’s bad boy cousin, Adrian.

Celeste endeavors to rebury the feelings that surface after this one night since her powerful family despises him. Kindred spirits, best of friends they attempt to douse their attraction; however, Adrian always seems to know exactly how to push her buttons and may prove too much to resist.

Having defied his family by making his way on his own terms, Adrian struggles to regain their acceptance. When he meets his cousin’s wife and wants her for his own, he feels he’s finally lived down to the title—black sheep. But, when his cousin dies unexpectedly, Adrian fights his attraction and swears to honor them both by helping her raise her boys.

Finding himself enveloped in a cocoon of love and acceptance, Adrian knows it’s more than just physical attraction. However, unforeseen events threaten to destroy those he now holds dear and his newfound peace.

Will the ties that bind them be their undoing?