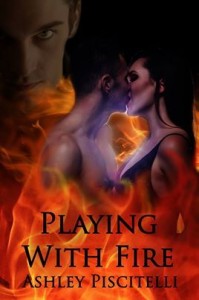 Madison Stevens has had a shitty life, her mother died at the age four and her father has always blamed her for it. She went through the foster system and is now attending college. Her boyfriend Chris is not willing to share Madison with anyone, not even her friends.

Her first day at college she meets Carter James, who makes her want everything she never thought she could have. She knows that she should ignore her feelings for Carter, but it’s not as easy as it sounds.

As Carter and Madison begin to fall in love, they face many obstacles. Their biggest one is Chris who is not going to let her go easily.

Playing with Fire will be the first book in a three book series. It is about the obstacles that stand in your way on the path to love. It tests the characters strength and commitment to each other on every level from old boyfriend/girlfriends, to insecurities, and throws a little violence and scheming into the mix.

“Chris was like fire. It was pretty to look at but if you got too close you got burnt, and if it wasn’t controlled it would destroy everything in its path. Doing what I was about to do with Carter was dangerous, but what can I say I never had parents to warn me not to play with fire.”