THANOS by Ella Frank is the third and final installment in the Masters Among Monsters series. Steeped in Greek mythology and history, this series is a must read for any paranormal romance lover.

I fell in love with series from the first book, and am anxiously awaiting this finale! I’m thrilled to be able to share with you an excerpt from THANOS, which will be released on January 26.  Read on for a sneak peek, as well as links for the other books in the series, which are available in Amazon’s Kindle Unlimited program! 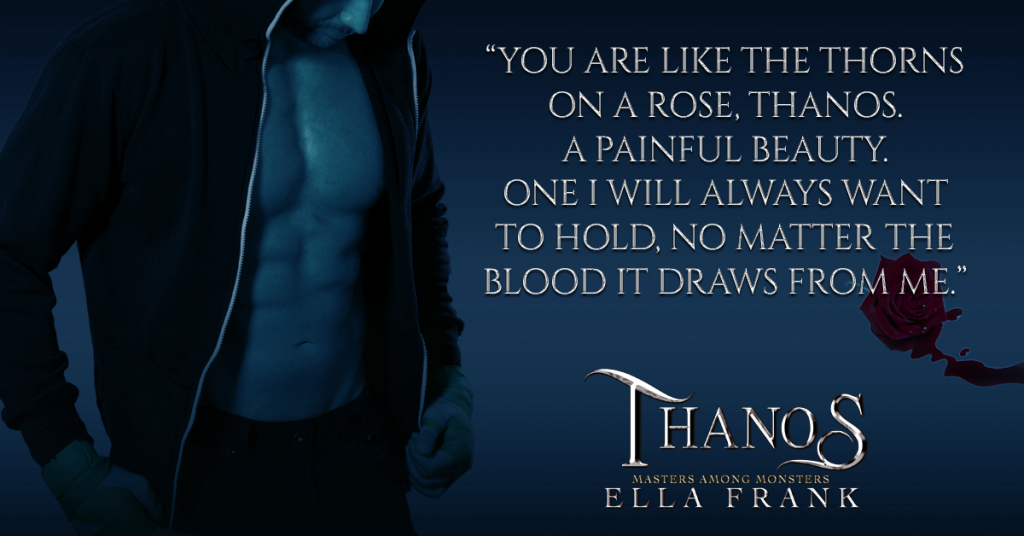 And The Blood Shall Run…

LONG AGO, THE Ancients of the vampire race searched for, and created, the one they wished to walk alongside for all eternity—their first-sired. They shared with them their blood, knowledge, and power. Thus creating a complex relationship where the first-sired’s existence integrated and tangled with the very being who made them, solidifying them as one.

Only three such connections exist within the vampiric hierarchy.

One born out of lust.

One born out of loneliness.

And the final born out of need.

As Eton, Ancient of Thanos Agapiou, walked away from where his progeny had sequestered himself with another, the steel-like binding of calm that his first-sired’s presence had once afforded unraveled and snapped like a chain severed. His permanent absence was now the only thing he had left to offer his Thanos to counter his ultimate betrayal. And he knew by giving it exactly what fate he had just sealed for himself.

After all this time, and Thanos’s strict control throughout the centuries, Eton had almost forgotten the allure of that which now stirred to life inside of him. But as the desperate, soul-searing need for destruction clawed for freedom, he recalled the reason for the desperate measures he’d taken the last time this transformation had occurred. Because without Thanos by his side, the infection that afflicted him threatened the very existence of his kind.

It was bound to happen. Just as it had once before. Tonight had been the final cut, but the distance, the separation, that had begun nights before when Thanos had demanded his absence…

“STAY WHERE YOU are. Do not come any closer.”

“I said do not come any closer.”

Eton stopped where he was, obeying Thanos’s words, as he always did. “Let me talk to you.”

“I do not want to talk,” Thanos spat. “Especially not with you.”

The venom in those words stung.

“I said no. You will at least grant me the simple courtesy of your absence, since I am already to endure an eternity of torment you have inflicted.”

Determined to get through to the angry male across from him, Eton pushed on. “It won’t ail you forever. You will soon heal—”

“Heal?” Thanos thundered as he rounded on Eton.

Eton schooled his earnest features, but he was a millisecond too late.

“You cannot even look at me without flinching. Do not talk to me of healing. This”—Thanos pointed to his scarred face—“this will never heal.”

He was right. Eton knew that, though his appearance didn’t matter to him. When he looked at Thanos, all he saw was his first-sired.

The private lives of the Ancients were rarely discussed. To Vasilios and Diomêdês, their first-sired represented the ones they’d chosen to take under their wing. Someone to share their eternal existence with and ones who would follow them, be loyal to them, and obey.

His and Thanos’s relationship was not that way at all. They kept their bond hidden, and for him, Thanos was the one who owned him—the one who calmed everything that ran riot inside him. O kýriós tou. His master.

ETON STAGGERED TO a halt halfway down the hall, and raised a hand to steady himself against the wall. The memory of that night was as vivid now as it was back then, and it had brought with it something far more dangerous than a disconnect between an Ancient and his first-sired.

His teeth tingled, wanting to punch free, and the skin around his lips drew painfully taut. It had been so many centuries since he’d sensed the dark presence within that the force in which it begun to resurface was overwhelming. He needed to get back to the sanctuary of his bedchambers. Back to the one place where he could lock himself inside and use magic to ensure his captivity—if only he could focus long enough to get there. He was grateful that no one was there to witness his undoing.

Eton’s hand shook as he dug his fingertips into the stone until they bled. He needed that bite of pain, since Thanos wasn’t there to offer it, that sting to distract himself from the other, more pressing needs rising up inside of him. As it was, there was no way he’d be able to concentrate long enough to fade while this ugliness was fighting for dominance. His body trembled under his effort to control himself, and just when he thought he had a chance in hell of grasping its leash, Kronos, one of Alasdair’s newlings, came around the far end of the hall.

Eton’s nostrils flared as he scented the male who’d come to a standstill like a deer in the brightest of headlights. As if he sensed the immediate peril he’d unknowingly stumbled upon, Kronos looked around, trying to locate anyone else as he swallowed. Eton heard the reaction as if it were his own, and lowered his eyes to the ground before digging his fingers deeper into the shale under his palm.

“Run,” Eton interrupted, and the low pitch of his voice was not only a warning to this young vampire, but a fucked-up request from the other side of him. The monstrous side.

Eton raised his head, and when his eyes, which he knew now would be blood red, met Kronos’s, the vampire took a step back, as if realizing just how much danger he was in.

“Run,” Eton said once again, and this time his voice sounded as though it had been grated over the sharpest, most jagged of edges. It was hoarse, torn, and so foreign that Eton was as stunned as Kronos that it had come from him.

“I…I was coming to check on Thanos,” Kronos said, and then stopped talking when he noted the change that had begun. Eton knew exactly what the young male was seeing. It was a sight only three others had ever borne witness to—and survived.

Kronos’s fangs dropped down in an automatic response to the threat metamorphosing before him. There was shock stamped over his pale features, his entire body trembled, and as he inched away, Eton caught the movement and flashed over in front of the male. His hand jerked out and his bloodied fingertips gripped Kronos’s throat in a punishing hold as he hauled him up and in line with what was a distorted version of the face he wore as Eton. “I told you to run.”

Kronos opened his mouth to respond, but his protestation was never heard. Eton’s fist slammed through the male’s breastbone, and a harsh wheeze expelled from between Kronos’s lips. The cracking and splintering of his ribs only heightened the pleasure Eton’s monster thrived on as he took a hold of the heart within the vampire’s chest cavity and squeezed. As Eton’s fingers sank into the cold organ, Kronos’s eyes widened.

“Yes,” Eton hissed. “You are finally seeing why… Why I told you to flee. Aren’t you, neare?”

Eton’s nails extended from each finger with painful precision. But where vampire’s nails were known to extend to pointed tips, his curled into sharp, talon-like claws that scraped the delicate membrane surrounding Kronos’s heart.

“I am daimon, Kronos. A hellish monster that should have been eliminated many years ago. I am a reminder of what dwells within us all.”

Kronos shook his head, and Eton could hear his frenzied thoughts. What’s wrong with him? This isn’t Eton. He’s the calm one. He won’t kill me…

He was right in one sense—Eton wouldn’t kill him. He had made it his mission to be as genteel and accommodating as could be over the years between the last time this happened and now. But…he was no longer thinking as Eton.

As the turmoil inside Eton swirled to a frenzied height of consciousness, he twisted his gnarled hand and then tore it from Kronos’s chest, ripping the vampire’s heart from his body. When the male went limp in his grasp, Eton dropped him to the floor and brought the heart to his nose, where he took a deep inhale.

The demon reveled in its victory as it slowly slithered back to the cracks within his soul, and then he let the organ roll from his palm and land by its lifeless owner at his feet.

His claws retracted and his body twitched as he came back to himself, and as he stood in the silent catacomb of the hall, the realization of what he’d just done slammed into him. Eton turned his hands over to see the scarlet liquid staining his pale skin, and reveled in the thrill it gave him.

Ever so slowly, he raised his hand to his mouth and licked a path along his bloodied fingers, and the red haze of the creature roared to life, threatening to take full control once more.

The metallic thunk of a lock sounded, catching his attention, and when his name was called, Eton realized he must’ve let that roar free. He pivoted on the balls of his feet and was stunned to see that Thanos had come out into the hall.

Ever since his disfigurement, Thanos had refused to leave his chambers. But even with the dark hood on and the half-face skull mask he’d asked for, Eton would know the set of those broad shoulders anywhere. Not to mention the sheer height of him.

Thanos’s blue eyes shifted to the lifeless body by Eton’s feet, and when he raised them once again, Eton knew the vampire understood what had just happened out there.

Before Thanos could say anything more, though, Eton snarled and took delight in the way Thanos backed up. Oh yes, as one of the few who remotely understood the hideous thing inside of him, Thanos knew exactly the kind of danger he was in, and the flare of his irises was a dead giveaway that he knew he was the cause of it.

That’s right, kyrie mou, Eton shoved into Thanos’s mind. You wanted your freedom. You wanted Eton to leave. And we both know that is the only way this can now end.

And with that, the Ancient who was once Eton faded from the hall.

Begin the Masters Among Monsters series with Alasdair, now FREE in Kindle Unlimited!

Ella Frank is the USA Today Bestselling author of the Temptation series, including Try, Take, and Trust. Her Exquisite series has been praised as “scorching hot!” and “enticingly sexy!”