Fantasies - we all have them.
For some it’s their dream job; others want the wedding, the 2.5 kids, the white picket fence.
My fantasies are a bit more...depraved.
Dark and sinful, they have destroyed relationships and my livelihood, yet I still submit to them like a slave.
Sex.
For most, it’s a natural expression of love, caring, or lust.
But there are those of us who can’t stop once we’ve had a taste.
Those of us who don’t want to.
And the shame of that never-ending cycle will eat us alive...
My name is Evan James, and I am a sex addict.

THIS. Now THIS is the way you hook readers into you new serial. Evan James is a character that has been on my mind since I read this story. From the synopsis, you’ll see that we’re dealing with a sex addict here. I thought I knew what I was in for when I started this book. I thought I would be reading about a cocky asshole, full of swagger, screwing his way through life. And I wasn’t exactly wrong, but I wasn’t quite right, either.
Ella and Brooke bring us a story that is true to the title. Evan James is desperate. Desperate for so many things. He’s a slave to himself. Throughout this book, we watch Evan succumb to himself over and over again. Honestly, some parts were a little hard for me to read. That’s what impressed me so much about this story, the way that Ella & Brooke managed to make him a sympathetic character, all the while maintaining his outer demeanor as well.
More than a laundry list of Evan’s exploits, we’re reading about a man who truly is a sex addict. His pain, his inner thoughts, his compulsions, all spilled out on the page. Gritty and unapologetic, Evan is telling his true story through these authors, and we’re all just along for the ride.
Naturally, the steam factor in this one is off the charts. I was reading this book while on the bus, and I won’t even lie, I thought about closing the book, because it was making me squirm a little bit!  But the heat aside, this story was so much more.   This isn’t all about Evan and his sex life. In this first installment, we get a little peek into the man that Evan James is, but I feel like we’ve only scratched the surface with him. There’s a real story here, a journey we’ve yet to take.
I’m really excited to see where this story takes us, and if this installment is any indication, we’ll be going places we never thought we would. “Come here.”
Evan James crooked his finger at the blonde currently shimmying back into her minuscule, tight, black dress. The same one she’d worn last night that had called like a siren’s song to his cock in the middle of the dimly lit club.
She looked over at him with heavy-lidded eyes and held the barely there fabric still around her waist. His eyes zoomed in on the impressive breasts overflowing out of her sheer, black bra. Covered, but not enough.
His mouth watered, and he wanted to drag her back to the bed and take hold of her ripe nipple before pulling the fabric down and out of his way to take her fully into his mouth again.
After having had her so many times in the last few hours, she’d no doubt taste of him on every inch of her soft skin. He liked that. Before, she’d tasted faintly of vanilla musk—a fragrance he wasn’t overly fond of. He’d made quick, dirty work of her though, marking and leaving his scent on her with his lips, his sex, his come, and he figured one last go-round before sending her on her way would suppress his craving for at least a couple of days.
He hoped. His appetite was voracious.
“Can’t get enough, can you?” She leaned down over the edge of the bed and placed her hands there, giving him an ample view of what he wanted. Now.
He narrowed his eyes. “Don’t play with me.”
Blondie tsked and put her knees on the mattress, crawling on all fours toward him. “Oh, baby, I told you you’d never want me to leave once you got inside.”
She was right about that much. If he could live in pussy, he would. It was his weakness, his addiction, the one thing he’d give up anything and everything for. And he nearly had. 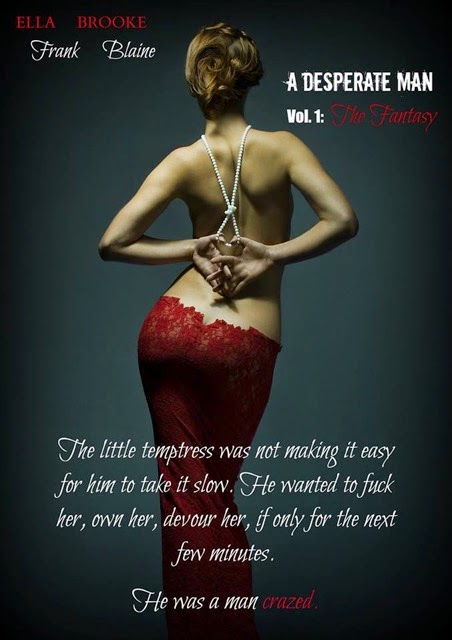 FAST TALK WITH ELLA AND BROOKE

1. 3 things you never leave home without?

Brooke: A bottle of water, chapstick/lip gloss, and some form of communication
2. Name the last 3 books you have purchased.Brooke: The King by Tiffany Reisz, Made by J.M. Darhower, and a signed copy of The Bane Chronicles by Cassandra Clare

Ella: A King Undone by Cooper Davis, Succubus on Top by Richelle Mead, and Sempre by J.M. Darhower
3. Your biggest pet peeve?

Ella: Being told to talk in a quieter voice. I get loud when excited. It takes away the fun when interrupted and told to speak softly. ~pouts~

Brooke: Most of mine have to do with people being glued to phones in public, whether it’s during a movie or live theatre, at dinner with friends, or while trying to have a one on one conversation. No one’s in the moment anymore.
4. Favorite male body part?

Brooke: Eyes, always. Can height be a body part too? Because I hate being taller than the guy all the time.

Ella: Nice, broad shoulders.
5. Do you believe in love at first sight?

Ella: No. I think you can find someone extremely attractive, but to love a person, I believe you need to know them.

Brooke: No way. To love someone, you need to love all of them, even the ugly parts they don’t want you to see. And at first sight, they definitely aren’t showing off those flaws.
6. Sex on the first date?

Brooke: For my friends? Absofuckinglutely. I love hearing about it afterward. 😉 But for me, probably not. I’m much shyer than I let on.

Ella: No. And not because I’m a prude, I just never have.
7. If you can be any fictional character for a day, who would you want to be?

Ella: Elizabeth Bennett on her wedding day (and night) to Mr. Darcy.

Brooke: Ohhh, good one, Ella. I’m gonna go total potternerd and say any character in Harry Potter. For the butter beer and magic spells, of course.
8. Write a short letter to Santa Claus and show us how it would like.

Brooke: Dear Santa, I’ve been really good for the last twenty minutes that I’ve been writing these answers, so let’s just focus on that, shall we? Ps – I’ll leave you dark chocolate bacon cupcakes instead of stale cookies this year if you put our book in everyone’s stockings.

Ella: Dear Santa, Just because my name made it to the top of the naughty list does not mean I participated in any kind of shenanigans. I was a good girl, I promise… well okay, maybe not promise, how about…I think? Love & kisses, Ella

About Brooke
You could say Brooke Blaine was a book-a-holic from the time she knew how to read; she used to tell her mother that curling up with one at 4 a.m. before elementary school was her ‘quiet time.’ Not much has changed except for the espresso I.V. pump she now carries around and the size of her onesie pajamas.
Her first solo novel, a romantic comedy, is due out in early 2015, but first, she thought she’d write a raunchy story with her best friend that would scar her conservative southern family for life.
If you’d like to get in touch with her, she’s easy to find – just keep an ear out for the Rick Astley ringtone that’s dominated her cell phone for ten years.
Brooke’s Links
Website: www.brookeblaine.com
Facebook: https://www.facebook.com/BrookeBlaine.Writer (Pages)
https://www.facebook.com/BrookeBlaineAuthor (Personal)
Twitter: https://twitter.com/BrookeBlaine1
Instagram: @brookeblaine1
Goodreads: https://www.goodreads.com/author/show/9759417.Brooke_Blaine
Pinterest: www.pinterest.com/brookeblaine11
Email: brookeblaineauthor@gmail.com
About Ella
Ella Frank is a #1 Amazon Bestselling Author. She writes both contemporary and erotic fiction and is best known for her Exquisite Series, and Temptation Series.
The minute she began her love affair with reading, she became and avid supporter of the romance genre and has never looked back.
Ella is Australian born and bred but currently resides in Houston, Texas with her husband.
Ella’s Links
Website: www.ellafrank.com
Facebook: https://www.facebook.com/ella.frank.31 (Pages)
https://www.facebook.com/ella.frank.author (Personal)
Twitter: https://twitter.com/EllaFrank2012
Instagram: @Ellafrank1
Goodreads: https://www.goodreads.com/author/show/6451816.Ella_Frank
Pinterest: http://www.pinterest.com/ellafrank/
Email: ellafrank2012@gmail.com
Blog: http://blog.ellafrank.com