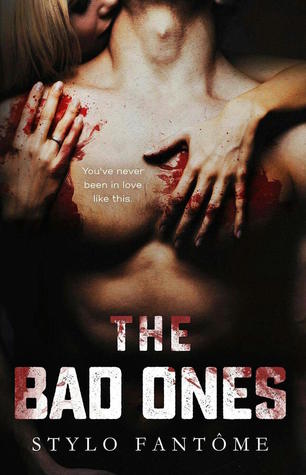 Sometimes, it's dirty and wrong, buried six feet deep in a secret place where only wild things dare to go. Hidden behind a big black curtain that covers things no one should ever see.

Sometimes it happens between two people who should never be allowed to come together. One who is a match, and the other who just happens to be gasoline.

One strike is all it takes to burn the whole world down, and that's exactly what they plan on doing.

Even if it kills them.

If you haven’t yet gotten the memo, Stylo Fantome is obscenely talented. The things she can do, the stories she can tell, the world that she creates out of 26 simple letters is stunning.

The Bad One features an unlikely couple whose connection is undeniably electric, yet wholly unusual. They’re at their most alive when they’re together, yet they’re also at their most sinful.

Wickedly hot and deliciously depraved, The Bad Ones isn’t just a simple romance. In fact, I’d say there isn’t much romance at all. At least not in the traditional sense. It’s the story of two halves of the same dark soul.

I didn’t just read this book, I reveled in it. I was on a wild ride, and Stylo Fantome was the crazed driver. This book was beyond intense, and very different from anything I’ve read lately. I never knew what to expect, predicting what was coming was impossible. I could only sit back, giddy with anticipation, while I turned the pages and watched the madness unfold before me.

With an ending that will leave you holding your breath, The Bad Ones is a uniquely dark story that I won’t soon forget.

After almost three years of working together, I honestly can't say enough about Mo. In so many ways, she's a...

After almost three years of working together, I honestly can't say enough about Mo. In so many ways, she's a better me than ME. I never feel the need to micro-manage; she just sees a need--often before I do--and takes care of it. Professional, organized, and knowledgeable, Mo is so much more than a PA. She is a dear friend, and a champion of both indie and traditionally published authors.
https://www.thescarletsiren.com/testimonials/3227/
Mo is super efficient and knowledgable in this business and is extremely helpful! Without her help and services, I wouldn't...

Mo is super efficient and knowledgable in this business and is extremely helpful! Without her help and services, I wouldn't have time to get much of anything done! Highly recommend her to all authors out there looking to get some breathing room so they can actually write :)
https://www.thescarletsiren.com/testimonials/3228/
5
2