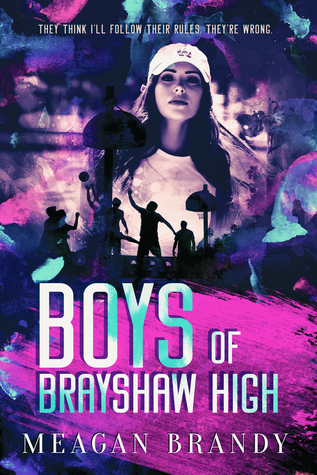 "Girls like you aren't exactly welcomed at a place like this, so keep your head down and look the other way."

Those were the exact words of my social worker when she dropped me in my newest hellhole, a place for "troubled teens".

I didn't listen, and now I'm on their radar.

They expect me to play along in their games of hierarchy, to fall in line in the social order they've deemed me fit.

Too bad for them, I don't follow rules.
Too bad for me, they're determined to make sure I do.

Inconceivably attractive and treated like kings...these are the boys of Brayshaw High.
And I'm the girl who got in their way.

This book was a lot of things. One thing that it was not…is good. Don’t get me wrong; I’m not saying I didn’t like the story, I actually did…when Penelope Douglas and Erin Watt wrote it. This book was so busy trying to replicate the essence of those books, trying so hard to be something, it forgot to actually be anything. The storyline wanders more than a zombie horde in The Walking Dead. I still don’t even know what this book was supposed to be about.

Obviously, books in this “genre” are over the top and unbelievable. And I can get down with that! They’re escapist, soap opera-ish fun. But this…this book didn’t seem to be based in any reality that I’m familiar with. This story was too far-fetched, too nonsensical, and at the risk of sounding harsh, it became almost laughable at a certain point. There were far too many things that just made no damn sense.

Raven, our main character, was a study in contradiction. Her thoughts and actions were a metronome, back and forth, back and forth, setting a repetitive pace for the entire book that just wore on my nerves as the pages turned. Don’t even get me started on the underground fighting ring nonsense…I mean, what in the Travis Maddox was going on there? That plot device is so old, it’s collecting Social Security. Can we not? No, it’s not fresh and edgy because a girl is fighting. It’s tired.

The “men” in this story (who are really boys…c’mon) are props in this game of “What Inanity Can We Foist Upon The Reader Now?”. They’re caricatures. They are the cardboard cutouts…no substance, no qualities that set them apart from others of their type. Yes, this archetype has been done, almost to death. But most authors still manage to make the characters interesting in some way. That was not the case here. I couldn’t care less about them, and I’m still, hours and tens of thousands of words later, not sure which one is which. And I’m not motivated to try and figure it out.

Side note: This book should have been subtitled, “OMG Who Talks Like That?”

And I don’t know if this book was overly long, or it just seemed that way because I had to read so many sentences over and over again because they were illegible at first glance. Commas were tossed throughout this manuscript like they were fired out of a confetti cannon, yet none of them ended up where they are supposed to be. Missing words, incorrect words, an overabundance of descriptors and qualifiers…the editorial state of this book is a TRAVESTY. I can only assume one of three things happened.

1) The editor and proofreader failed this author IN THE EXTREME. (and she should ask for a refund)

2) The author thought she knew better and did not accept the corrections said editor and proofreader made.

3) The wrong file was uploaded to Amazon.

Either way, the state of this book reeks of a complete indifference to the reader’s experience. I’m appalled that someone had the audacity to ask someone to pay to read this. It’s lazy at best, disrespectful at worst. I’m offended on behalf of readers all over the world.

The most disappointing part of this entire book is that there were brief glimmers of promise in there, but they were quickly snuffed out by all of the bullshittery. I am clearly in the minority here, but I just do not get the appeal of this book and have no desire to read anything else in this series.